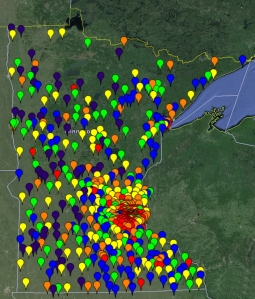 When it comes to the shortage of rural lawyers and the whole access to justice issue, Minnesota is not the first state that pops to mind. After all, the raw numbers would tend to indicate that there’s not much of a lawyer problem here in the land of 10,000 lakes; after all there are some 11.2 lawyers per 10,000 residents which puts us 12th in the nation (based on the currently available Avery Index). Especially when we look at the situation in our neighboring states: Iowa (6.2 per 10,000, rank 46), Wisconsin (6.8 per 10,000, rank 45), North Dakota (4.4 per 10,000, rank 51), and South Dakota (5.8 per 10,000, rank 48). But I’m not sure that the raw numbers really tell the whole story – it’s not so much a matter of how many, as it is a matter of where (and how old).  So, I took a look at the where the lawyers really are (or aren’t) here in Minnesota based on Zip Code (a task far easier than trying to sort things out by county). Granted the resultant map is a bit crude (those darn Google Earth pins really don’t scale well), but it serves to illustrate some of the gaps out beyond the Minneapolis/St. Paul metro area. The basic gist being that as one moves away from the metro area, law firms become smaller, fewer, and more dispersed.

Admittedly, my data is somewhat crude; I am looking at raw counts and I am not compensating for lawyers who are retired, who are otherwise not taking private clients (e.g.: in-house counsel, in politics, teaching, etc.), or a slew of other variables (data overlap, doubled counts, correcting for outliers, etc.) so don’t for a moment think this is in any way statistically rigorous or significant.

As I look at this map, there are two things that strike me. The first being that I’d like to know the age of those violet, blue and green dots out beyond the metro cluster. Based on my observations, odds are about a third of them are within 5 years of retirement (if not already retired – remember, for the rural lawyer retirement usually means you spend slightly less time in the office and slightly more time fishing – unless of course you move to a sun belt state) and another third have the midpoint of their career in their review mirror and are starting to think about succession planning and eventual retirement. The other thing is that access to justice is as much about income as it is about distribution. Just as lack of income can great an access desert” in the midst of a lawyer-dense metro area, so, too, can a simple lack of lawyers. The only good news is that it is far easier to fix the latter (and potentially more profitable for the lawyers involved) than it is to fix the former.

Copyright © Bruce Cameron and Rurallawyer.com, 2009-2016. Unauthorized use and/or duplication of this material without express and written permission from this site’s author and/or owner is strictly prohibited. Excerpts and links may be used, provided that full and clear credit is given to Bruce Cameron and Rurallawyer.com with appropriate and specific direction to the original content.
Loading Comments...
%d bloggers like this: